Since I’ve moved to New Jersey there’s been tons of incredible sunsets and sunrises that I’ve missed out on. But if there was only a way to predict epic sunsets. ?Well there is! There’s an app named Skyfire (available on Android and IOS).

I haven’t shot any cityscape photos for the past month because things have been hectic; and to say I’ve been itchy to get out there and shoot would be an understatement! Every photographer has their “go to” spots but I haven’t found one yet it my new neck of the woods in Essex County NJ. I had a few in Massachusetts (https://colonphoto.com/landscape-photography/every-professional-photographer-has-their-go-to-spots-heres-one-of-mine-ell-pond-melrose-ma) and downtown Boston was only a half hour drive. Plus you can’t lose shooting cityscapes where there’s water!

Last week I stumbled upon an incredible spot in Hoboken New Jersey and I knew this was going to be my new spot. So I started keeping an eye on my Skyfire app to see when it’d be ideal to head out and shoot. And according to the app today was the day!

How it works: When you launch the app it locates you (or you can set a location) and gives you a prediction. Red is a 95% chance of a fiery sky while white means it’s going to be overcast. 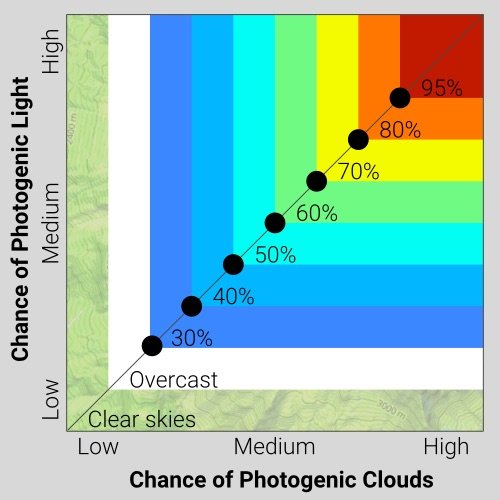 So yesterday as of 1:30pm the odds were looking very good!

But I said to myself I’m going to go no matter what and roll the dice. I figured I get up at 4am and drive with Uber to hopefully catch a ride to Newark Airport as it’ll get me close to the spot. It was a slow morning and I only picked up 1 local ride so I decided to just head over to Hoboken. But before I went I checked the app and things started looking good again!

Sunrise was 7:01am and I was in Hoboken by 5am looking for parking. The signs were confusing as I wasn’t sure if parking was for residents only at all times or only during certain hours. I’ve already came this far and if I get a ticket I’ll just have to eat it.

I started walking to the spot and wow-wa-wee-wa! The Skyfire app was on the money! And for those curious – my new spot (don’t tell anyone) is on the campus of the Stevens Institute of Technology.

But there was a problem. Can you guess what it is?

If you guessed branches – you are correct!

Sure I can Photoshop them out – but it’d be time consuming. So I decided to shoot tight and fill the frame.

Now the above image is what I was aiming to shoot as the Empire State building is iconic and recognizable. But my favorite image by far is this shot!

I love the crispyness (if that’s a word) of the photo and another factor that makes me say “wow” are the clouds.

Another anecdote I’d like to share with you guys – is that I was underdressed and freaking freezing! Yesterday was unseasonably warm with a real feel temperature of 50 degrees. It may sound chilly but last week there was a polar vortex where in NJ it was -13 degrees so 50 degrees felt like summer! So I guess my brain thought it was going to be warm in the morning but nay-nay!

Plus the entire time I was hoping not to get a ticket and I decided to call it a wrap and head to the car. Halfway to the car I turned around and HOLY COW – the sky was on fire!

I tried to be lazy and handhold the camera but for best results it’s always best to use a tripod. So I unpacked everything and captured this final shot…

I wish the sun would have risen right behind the Empire State building as it would have been even more epic. But sometimes you have no choice but to work with what mother nature gives you.

Now that I was super happy with what I captured I just wanted to get into my car to get warmed up. Luckily there wasn’t a ticket on my window!

As for my final say on the Skyfire app – truth be told it isn’t always 100% accurate but at least chances are good that it won’t be a complete waste of time making the effort to head out and shoot. Check out this video where I decided to head out with a 80% – 90% chance of an epic sunset.

When I get some free time, I’ll be sure to share other results that I’ve had in the past using the app.

That’s it for now – thanks for stopping by! HUGS