The best affordable starter drone with a camera for the summer of 2019. 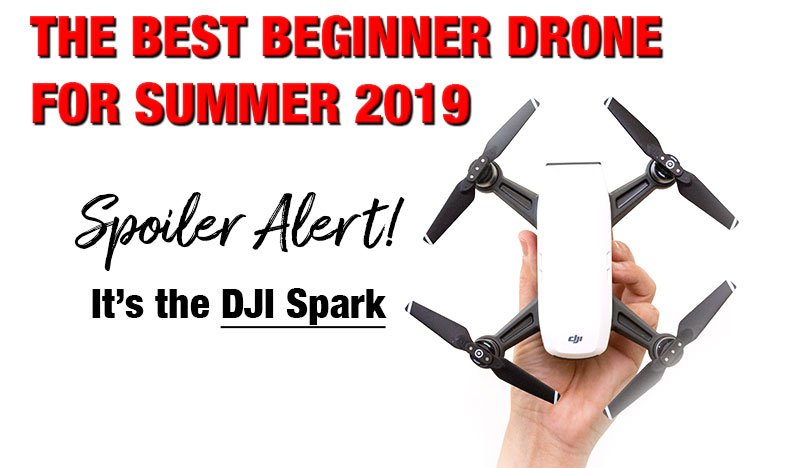 If you’re a photographer and/or a videographer and you don’t have a drone, I’m here to tell you – you’re missing out!  If you’d like to find out which drone is the best starter drone in 2019 it’s the DJI Spark.

When I purchased my Spark last year I bought the fly more combo. It cost me $550 and it came with a shoulder bag, propeller guards, the remote controller, extra propellers, 2 batteries and the charger.

Now $550 may sound like a lot – but in reality if you’re a photographer or videographer spending $550 on a camera is not a hard pill to swallow. Heck the battery for my video camera costs $207! Don’t ask what the charger costs!

I hesitate to call the Spark a “cheap” drone, but in the grand scheme of things it’s relatively inexpensive. But for the record I still find it nerve wracking putting $500+ in the sky. I can’t imagine what I’d feel like if I had one of  the professional drones that cost upwards of $120,000!

When you first see the DJI Spark in person, you’ll be surprised at how small it is! Especially when you compare it to other drones in the market. If you’re like me and you travel with a lot of gear the Spark (even with the extra batteries) will fit I nicely in your camera bag. But you may have to sacrifice bringing a lens. Or if you’re traveling with your significant other, it won’t take too much space in their bag! 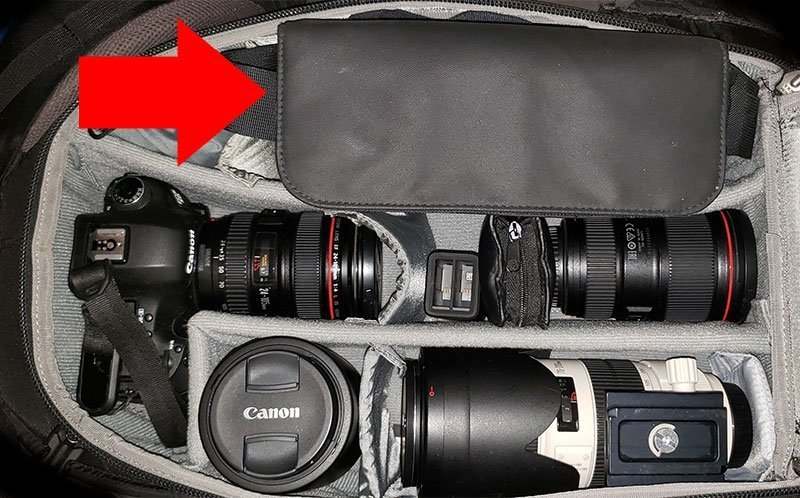 The red arrow is where my Spark, remote and 3 batteries live in my camera bag. It’s a tight fit but as you can see I can travel with my main camera, 4 lenses, and other accessories like my laptop, etc.

Truth be told I hesitated to purchase a DJI drone. Mostly because I’ve bought other products from them and I’ve always had issues. For example I bought 2 DJI Osmos and 1 went dead after a few weeks. Then I purchased a video camera and the Ronin-M stabilizer came with the kit. I didn’t base my purchase on the stabilizer but it was nice that it came with it. But I never got it to work properly – or at all for that matter.

So to say the least – I was hesitant to give DJI my money. But for several years while on jobs, I’d get asked if I had a drone. And I regrettably had to say “no” – which meant I was losing out on business.

Last year (after having to turn away several gigs) I decided to purchase the Spark for my 10 year anniversary trip. I rationalized it by thinking I’ve never heard of DJI drones falling from the sky (like the GoPro Karma) or heard anyone complaining about their drones.

And I must say I haven’t regretted it one bit! When it comes to drones (I can’t vouch for their other products) DJI makes amazing drones – that work! They are the undisputed kings and no other manufacture even comes close. As a side note – hopefully a contender gives them competition – as competition is good.

If you’re curious as to how the footage looks take a look at the footage from my 10 year anniversary trip in Saint Lucia.

4. TRAVELING AND GETTING THROUGH CUSTOMS

While I’m on the subject of traveling, getting drones through customs can be challenging. If your drone looks too fancy it may raise some questions. Since the Spark is small and admittedly looks like a toy – odds are you won’t get hassled at customs.

While researching “drone laws Saint Lucia” it became abundantly clear that getting through customs was a challenge for some people. Some people reported having to prove that the drone was theirs and had to show a receipt to prove they weren’t going to sell it.

You see the issue is import tax. Some counties like Canada have a huge tax and the customs agents want to make sure your intention is not to sell the drone.

As silly as this sounds – I can’t tell you how many offers I received from locals! Simply saying “I just bought it” wasn’t enough. But I found that saying it was an anniversary gift made people stop pressing me.

All that bing said – the Spark doesn’t look too fancy or expensive. Plus it doesn’t look like you’re in another country to gather intel! LOL

The Spark is marketed as the “selfie drone” as there are cute things you can do with it. Sometimes it’s easier for you to see what I’m talking about instead of me writing about it – so check out this promo video…

As great as the DJI Spark is there are some drawbacks (as nothing is perfect in life). Warning – I’m about to get a bit nerdy:

Now let’s talk about some of my favorite features / benefits… 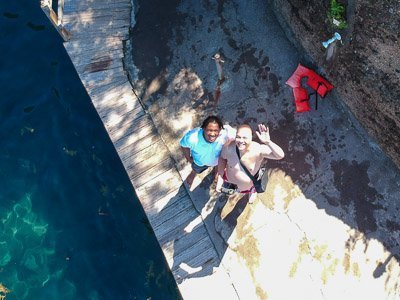 One of several curious locals asking me questions.

No review would be complete without sample images. Full disclosure – each image is a bit edited. I probably spent 3 seconds on each image in Lightroom tweaking them a bit. But rest assured the JPEG’s coming straight out the camera are pretty good! 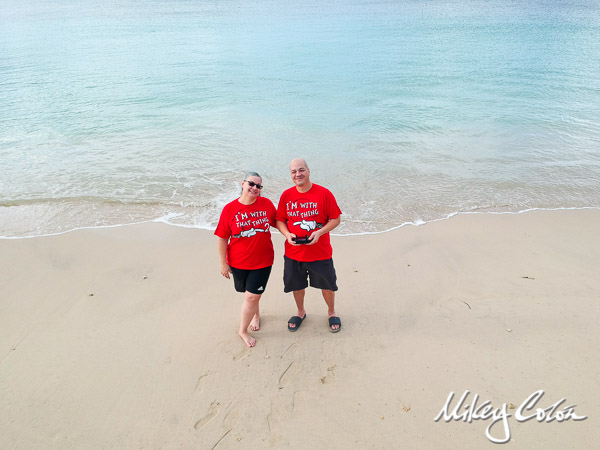 With a drone you can get unique perspectives without the use of a ladder! Or in this case a crane! 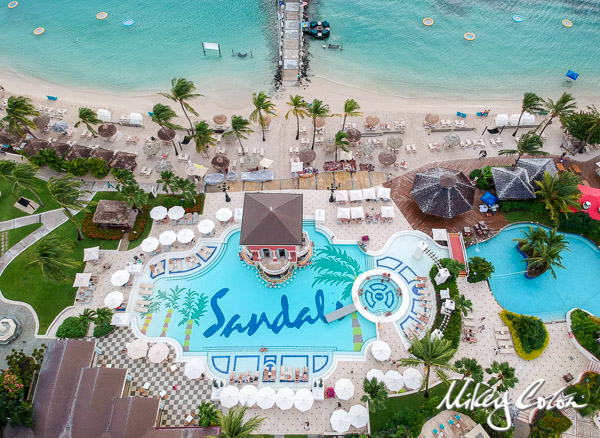 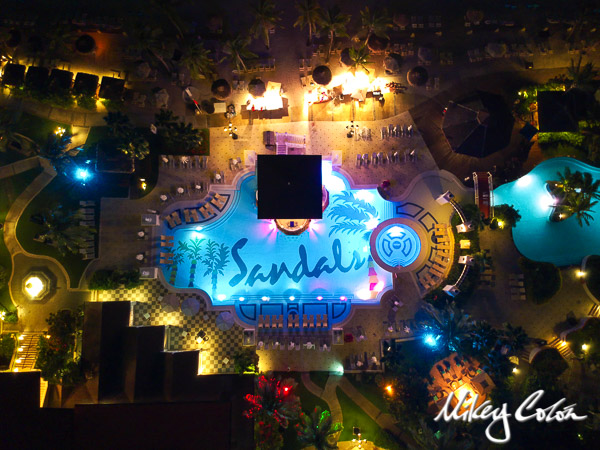 To my surprise the Spark can shoot at night! This is a one second exposure. 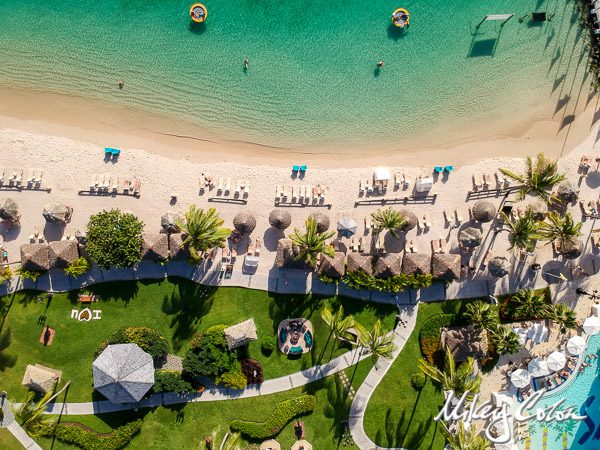 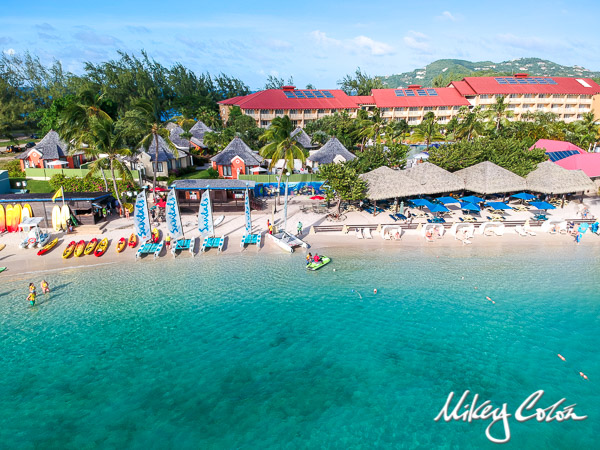 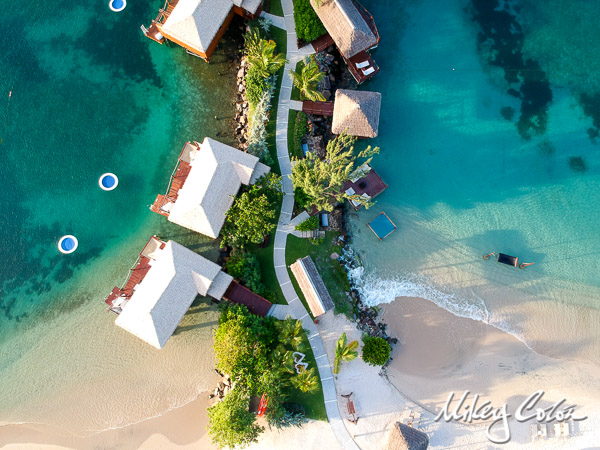 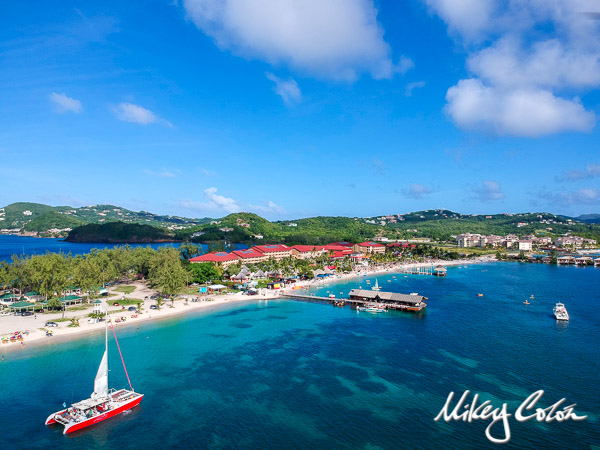 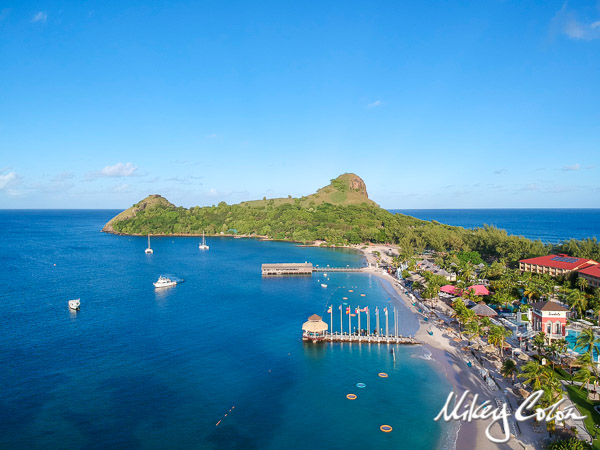 Is it just me or does this mountain looks like the Great Sphinx of Giza? 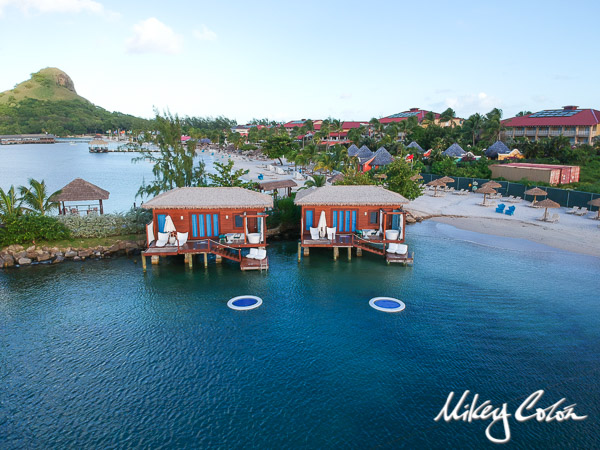 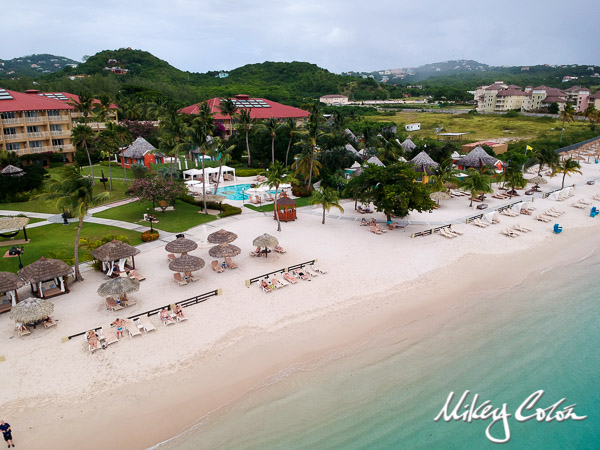 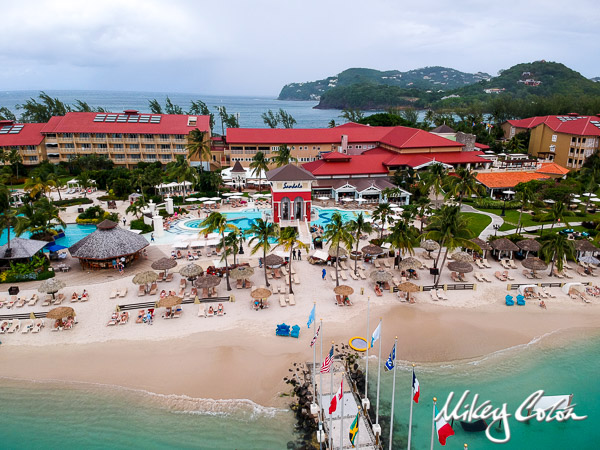 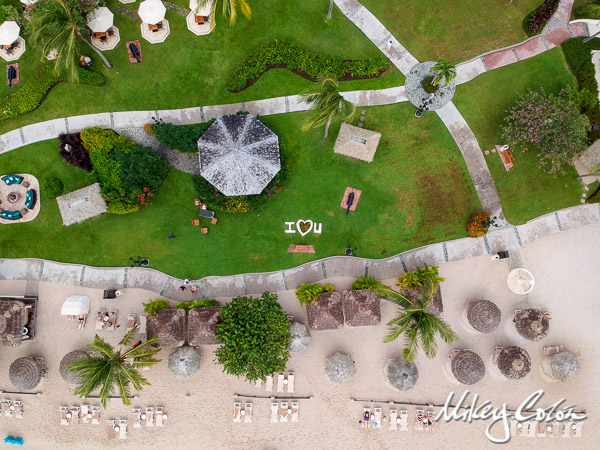 Here are what some images look like taken in overcast weather… 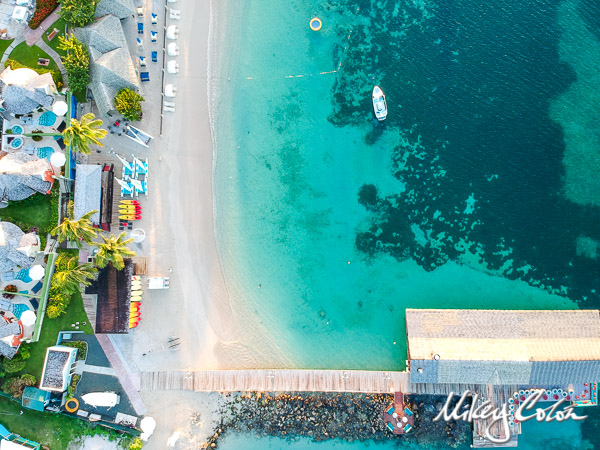 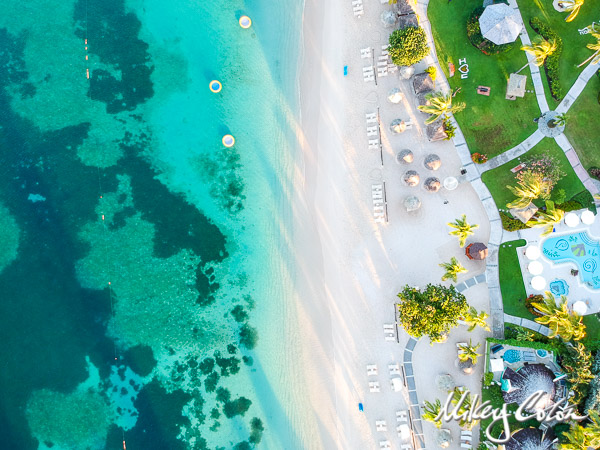 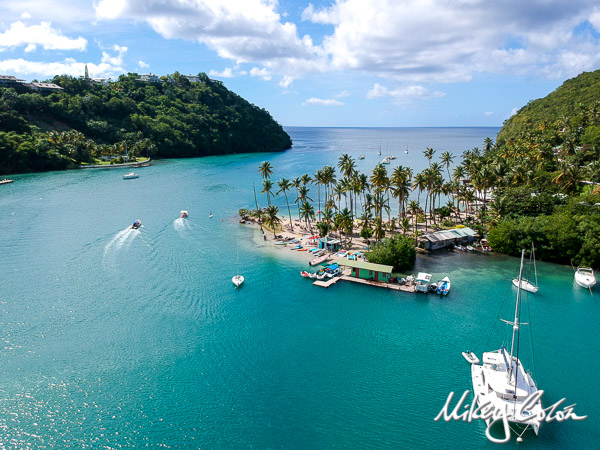 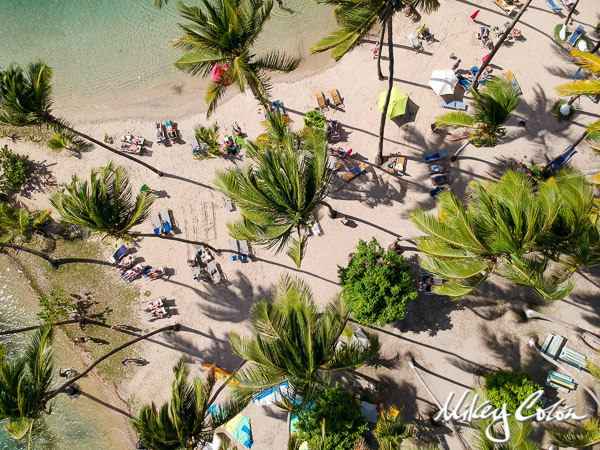 Be sure to point your gimbal straight down for a unique perspective! 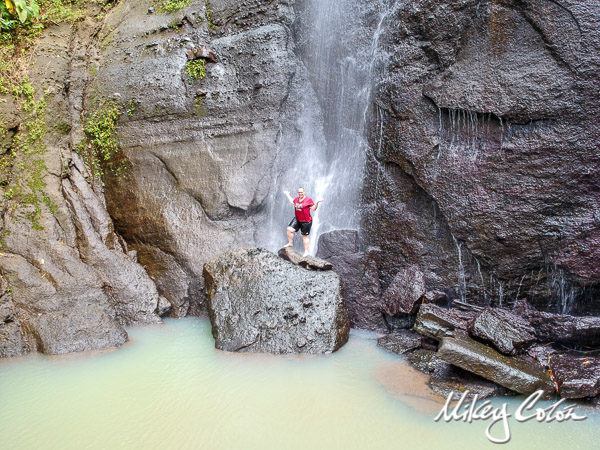 I could have chosen to go dip in the waterfall – but drone is life!

WHAT ARE YOU WAITNG FOR?!

If you live in a climate where there’s autumn and a winter, now is the time to buy a drone. Once it gets cold and windy you’ll have less of an opportunity to get out and fly. And if you’re like me you’re going to be daydreaming all day of getting out to fly your drone! Don’t hesitate and purchase your drown now! I can assure you won’t regret it.

If you’ve found this article useful, and the Spark is something you need in your life please consider using my Amazon affiliate links below for my suggested bundles…

I’ve scoured Amazon and I’m going to share the beast deals. The Spark comes in several colors but I’d suggest going with white as the darker colors will cause the drone to get hotter which means you may get less flight time (electronics don’t do very well in the heat). And if I were going to purchase the Spark again I’d go with option 3.

I like that it comes with the range extender, bag, gimbal cover, micro SD card and screen cover. The only thing missing are extra batteries and the landing pad.

The only “must have” accessories missing from this bungle is the multiple battery charger and although not 100% necessary the bag isn’t included. But it’s the best bang for your buck. If you’re willing to shell out a few more bucks I’d go with option 3.

As it’s said: “if you’re going to do something, do it right”. Why not get everything you need in one shot? This is the bundle I’d definitely go with!

THAT’S IT FOR NOW

If you’ve found this tutorial helpful, please give it a thumbs up and share this with your friends and family. I’ll be writing a lot more about drones in the near future so stay tuned for more droney goodness!

Fun Legal Disclaimer:
colonphoto.com is a participant in the Amazon Services LLC Associates Program, an affiliate advertising program designed to provide a means for sites to earn advertising fees by advertising and linking to products on Amazon.com. Amazon and the Amazon logo are trademarks of Amazon.com, Inc, or its affiliates.