Photos of Boston Common in the Winter. 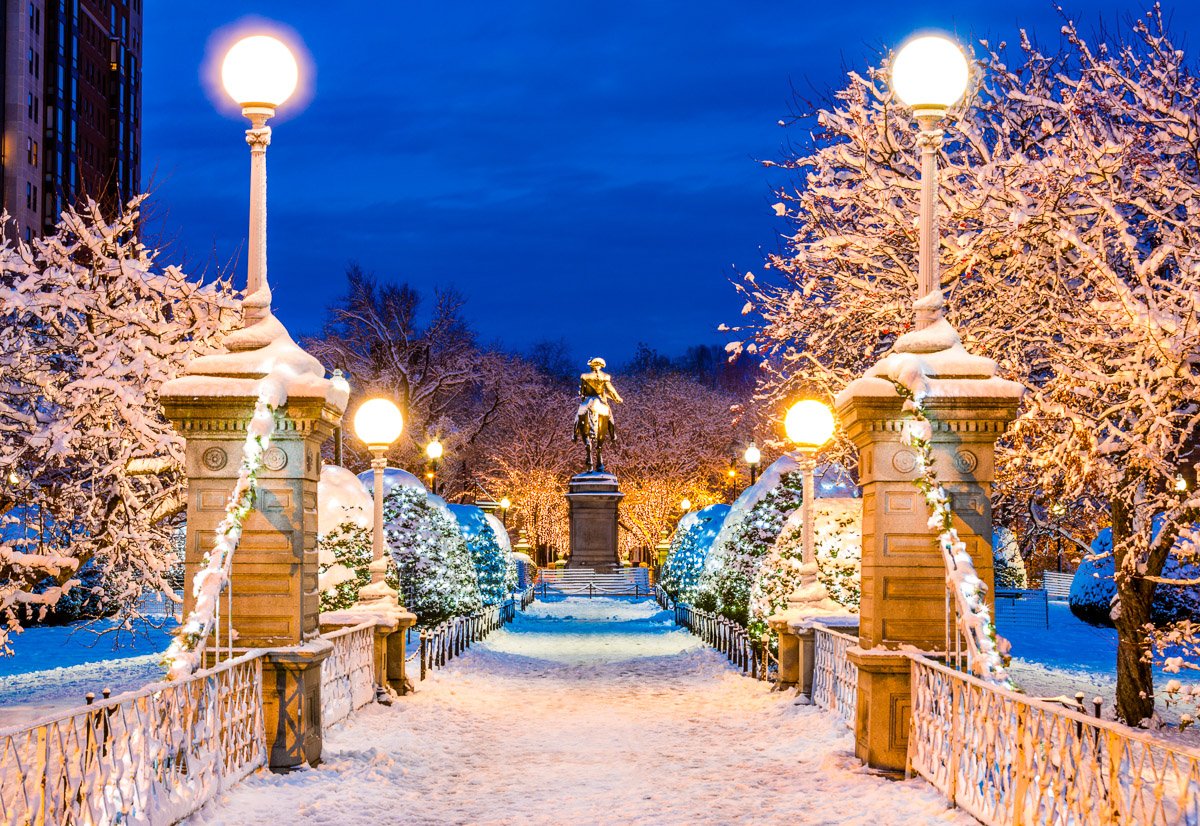 Every image has a backstory and here’s the backstory to some of my best selling images of Boston. These photos can be seen in many lobbies throughout Boston and on living room walls. To this day I’m still surprised as to how often I licensed them for commercial use.

If you’re a photographer reading this – I encourage you to go out and take photos during times when other photographers aren’t, as I promise you good things will happen.

I originally wrote this post in December 2017 and now that it’s almost freezing outside – I figured it be a great time to revisit my Boston Winter Wonderland post. Hope you enjoy!

Last Friday my nephews were staying over and I thoroughly enjoyed their company because they were so excited playing video games. 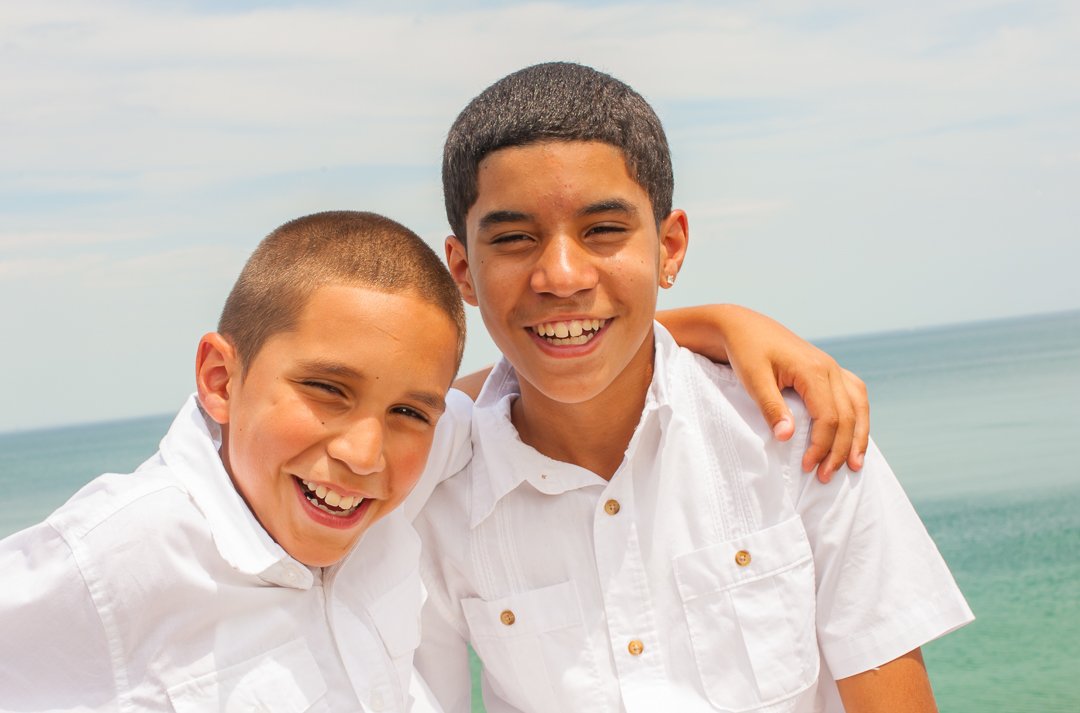 I was trying to think of a time when I was so excited about something as they were. I typically don’t get that worked up about things – but I do get excited when I capture amazing photos.

And just as I was doing some self reflection – it started to snow.

I took Gizmo for his nightly walk and as I stepped out of my building I was blown away as to how beautiful the trees looked with snow on them! 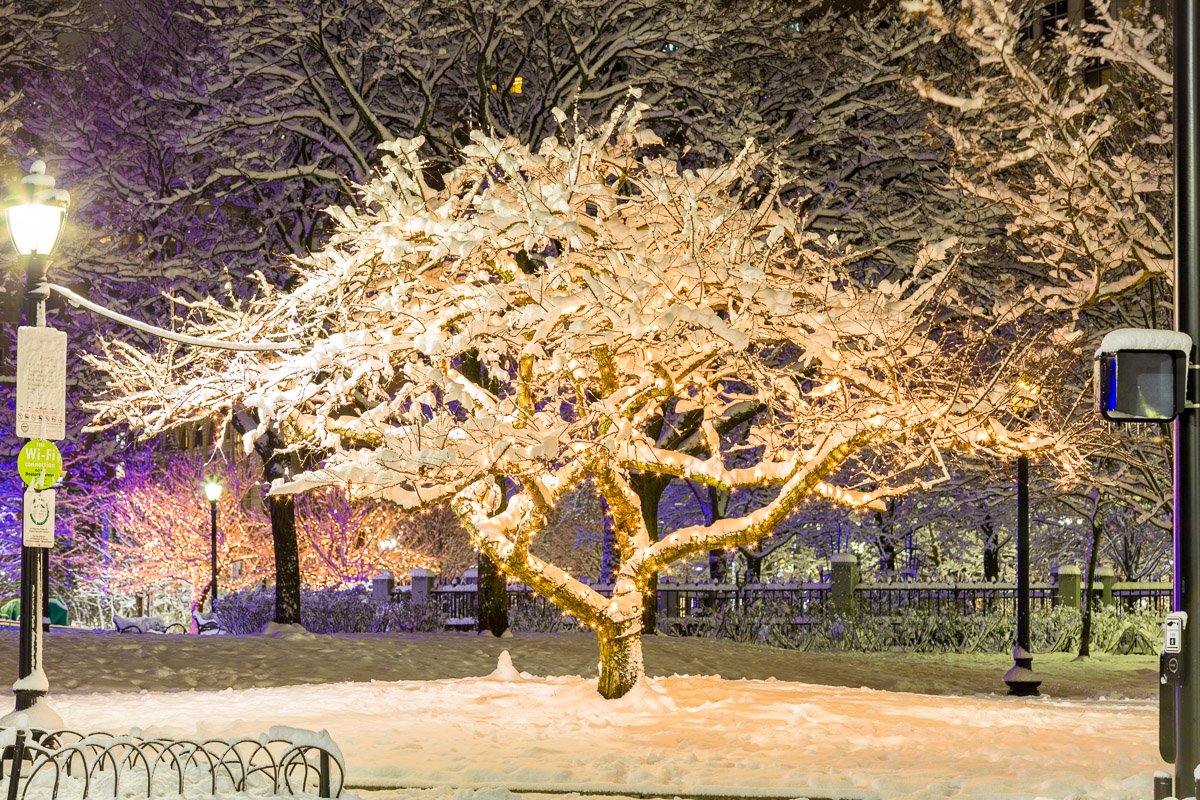 Snow is beautiful coming down – but as adults we know things are going to get messy outside once it starts to melt. For the uninitiated, once snow in the city gets polluted it turns into a sludge that’s called “black ice” and it’s not very pretty.

Then I thought to myself I might as well take advantage and go early in the morning to take winter sunrise photos.

Sure I can shoot trees during the day, but there’d be too many people ruining the shot. This is part of the reason I like to take photos at night. 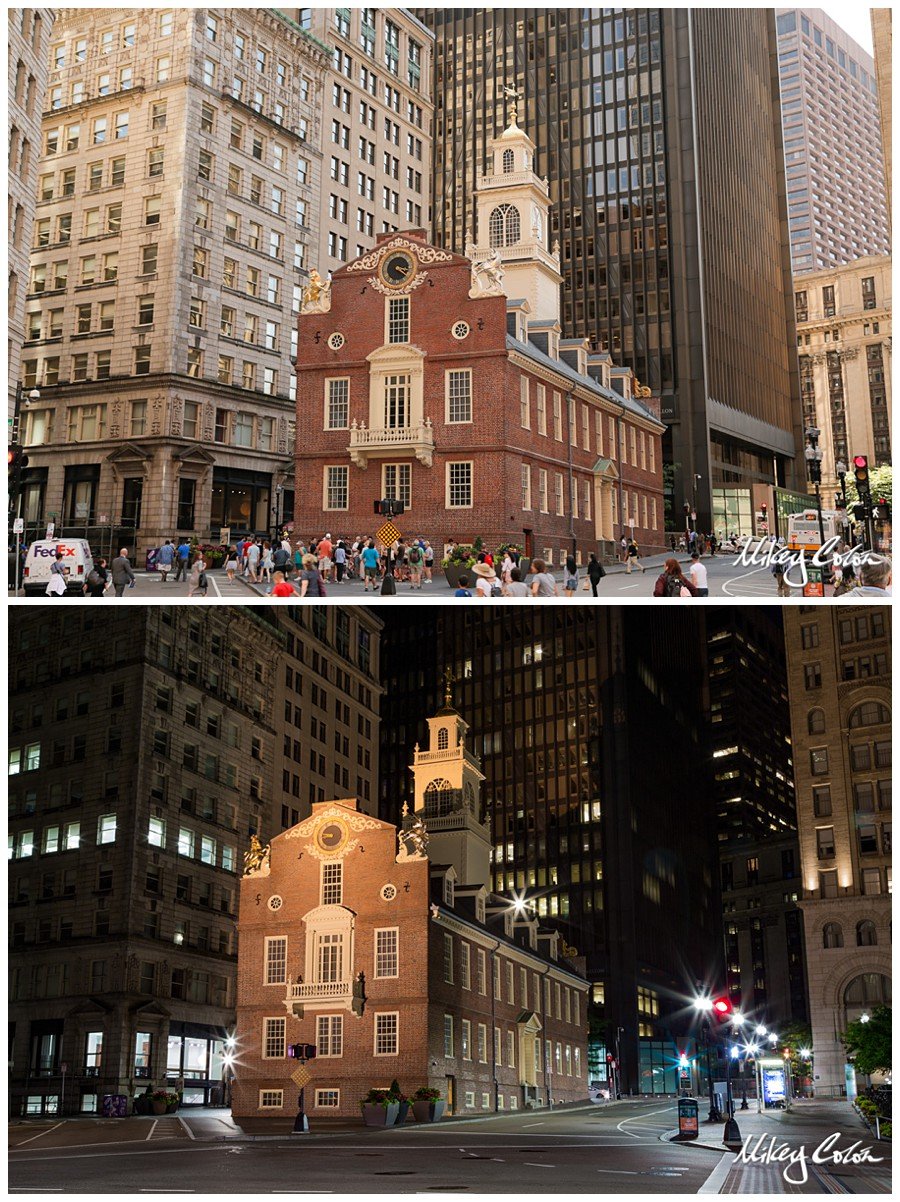 Getting up super early is hard for me as I’m a night owl. But the good news is I’d already be up because my wife was going on a business trip – which meant we had to wake up at 4am anyway. I looked up the sunrise time in Boston and it’s currently 7:30 am.

So the plan was to sleep early, drop her off at the airport and hit the city. But there was a screwball thrown in the plan – as for whatever reason I couldn’t sleep.

We’ve all been at that crossroad where we have to decide if it’s worth sleeping for a short while – or just break night. So I decided break night knowing I’ll feel tired all day.

After I kissed my wife and told her the doggies and I will surely miss her, I headed to the Trellis at Boston’s North End in Christopher Columbus Park.

As you can imagine there weren’t many people out. Which can be a good thing – but I’m always aware of my surroundings. People sometimes think I’m paranoid – but as photographers we have to have what I like to call “situational awareness”.

When I envision a particular photo and it comes out the way I was thinking – I get pretty excited! I always wanted to get a snow covered photo of the Trellis at night with my ultra wide lens. 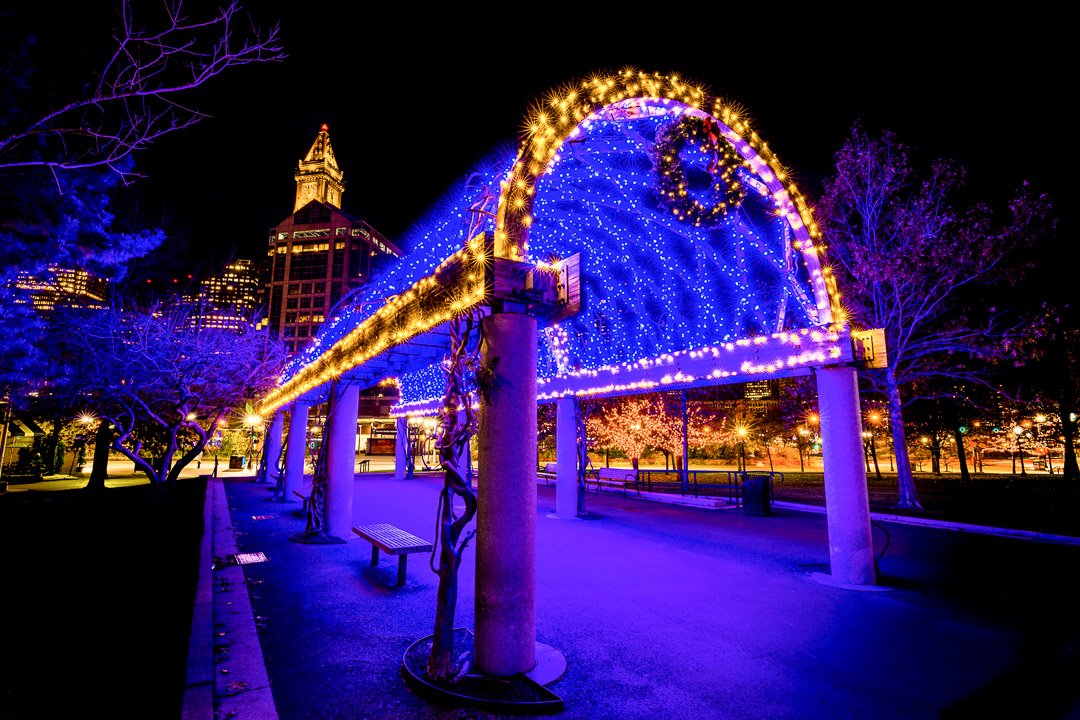 Although it stoped snowing the wind was still blistering; which meant I wasn’t going to change lenses outside (as if snow or moisture gets int the camera – it’ll be a very costly repair bill).

So I decided to challenge myself and only use a 70-200mm telephoto lens. Plus it has a long lens hood so if it were to snow again I wouldn’t have to wipe snow off the front element.

9 times out of 10 when I shoot the city at night – I always end up running in to crazy people. This time it was a lady (who had to have been sky high) rambling about reptilians and other head scratching topics.

I was also surprised to see people jogging at 5 in the morning. Now that’s dedication!

Another interesting tidbit I’d like to share – was that around 6am there was a guy taking pictures of himself doing pushups. He used a giant ladder as a tripod to prop up his phone from a high vantage point.

I didn’t know what he was doing until I asked him. It turns out he does pushups everyday in different locations around Boston. He then takes the pictures and sends them to his daughters in California.

You can see me on the bridge in the background while the Pushup Man does his morning routine. Take a look at his Instagram as it’ll put a smile on your face! https://www.instagram.com/pushupman

Once I got my bearings and the sun was beginning to go down I started snapping away! 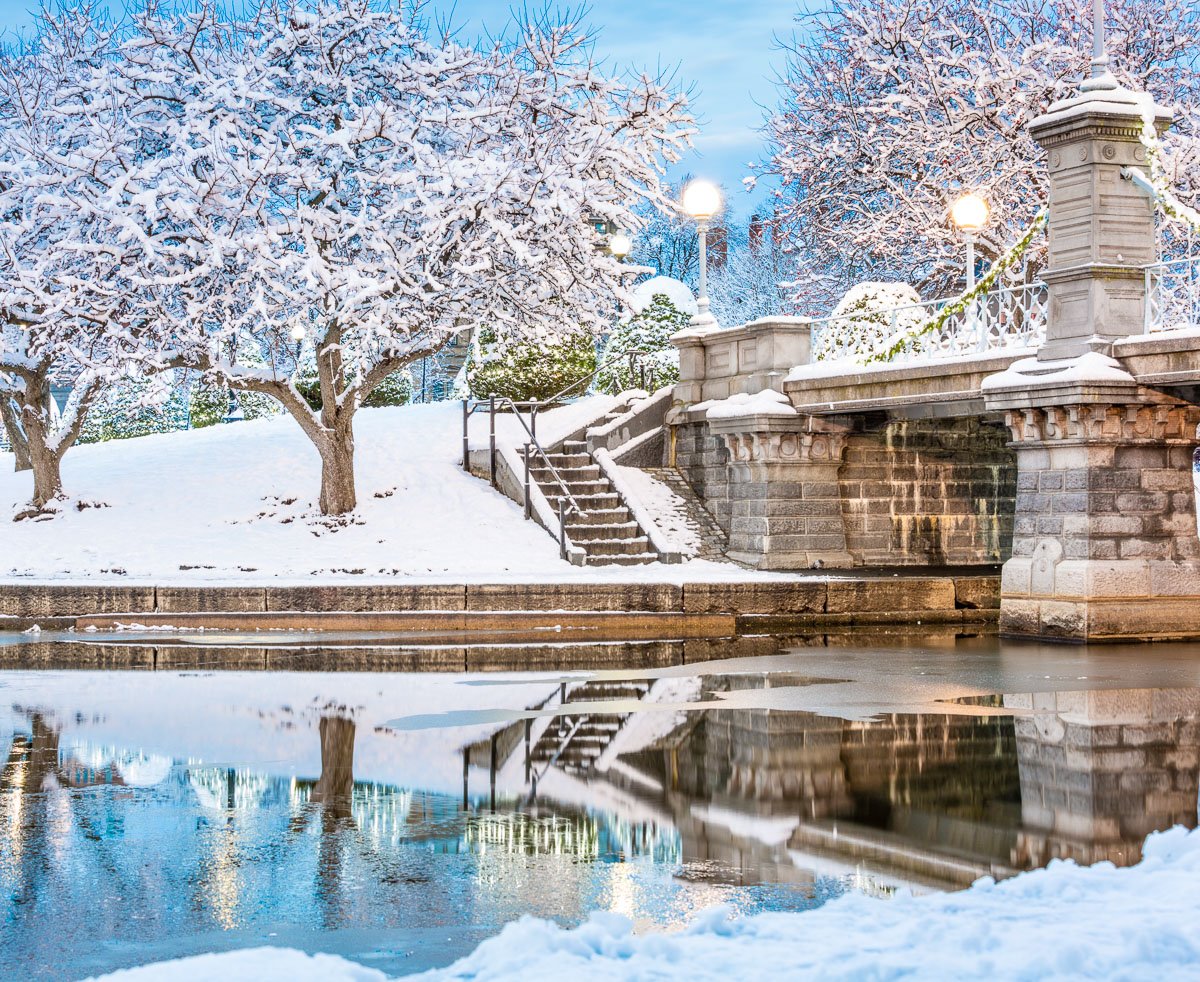 As I mentioned earlier – you can now see how if there were people walking around – the photos wouldn’t be as dynamic. 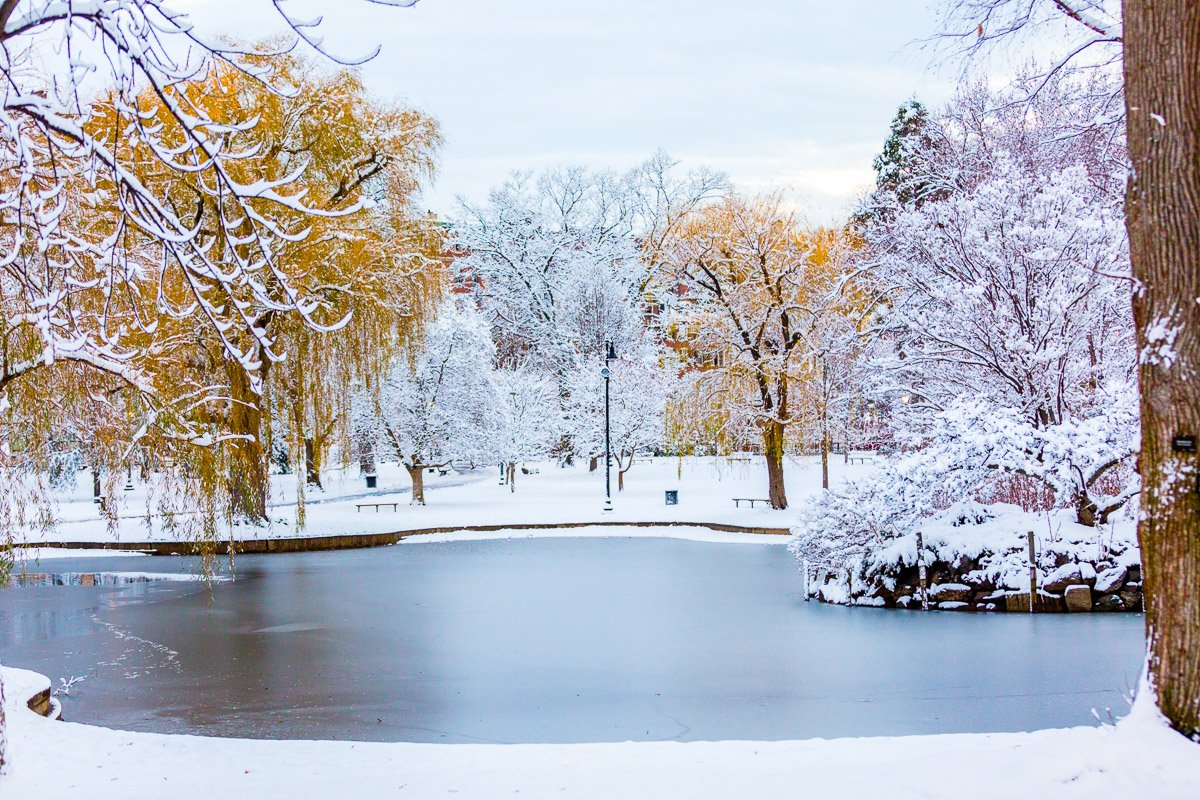 A picture of a tree can be boring – but sprinkle some snow and it’ll look amazing!

I’d say around 7am, the sun was creating harsh shadows and the park was starting to get a lot of visitors so I decided to head home.

As I predicted I was exhausted the entire day but it was most definitely worth getting up early to “get the shot’.

And while I’m on the topic of snow, check out a photo of Gizmo looking rather dapper in the winter.

If you’d like to decorate your home or office with these images and support my art –  click on the image below.